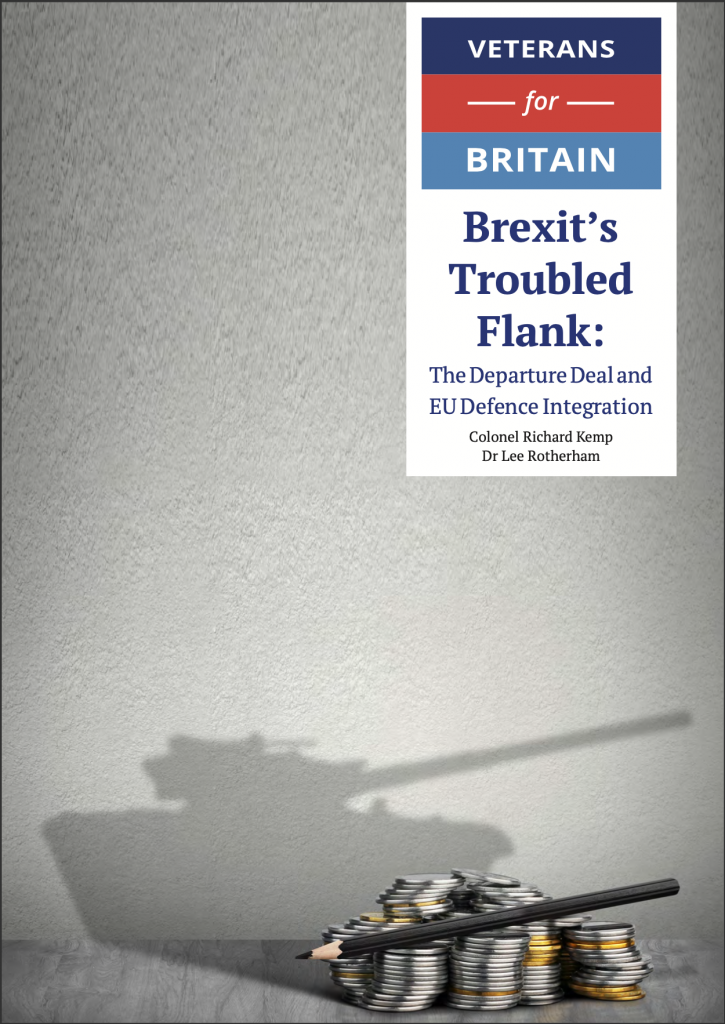 One element that has not featured prominently in the public debate over the future shape of the post-Brexit deal has been over Defence, and more broadly the encompassing range of Security and International Relations with which the issue is closely bound.

The Barnier Model envisages a deal comprising four pillars, in which two are the old Justice and Home Affairs and Defence pillars re-established from Maastricht Treaty days. The Chequers approach has also envisaged a form of pillar structure in which both form separate units. In both cases, close institutional cooperation is anticipated. In both cases, Parliament does not seem to have been given much opportunity to consider the ramifications or its ability to provide future oversight, and safeguard national interests.

This paper reviews the risks arising from a lack of strategic reflection on the nature of those ties, given that the EU is now in a period of acceleration towards a Defence Union. A dispassionate audit of past trends, stated objectives, and highlighted ambitions clearly indicates that the side arrangements already being made during transition generate real risk

for the UK’s strategic global interests; and consequently, that element of the negotiations also needs a radical rethink, and instructions to civil servants engaged in ongoing planning needs to change.

Consequently, we review in these pages a history of the development of a Common Security and Defence Policy, alongside its twin the Common Foreign and Security Policy, revealing the indisputable course of direction towards the declared aim of a Common Defence. We show how it has taken place over five phases and now is advancing apace with a mandate that unblocks major integrational opportunities for the EU.

We briefly explain how this process is part of a wider horizon of integration across a range of other policy areas, meaning that firewalling within a close association agreement with the EU (such as Chequers provides) is ultimately an impossible task.

And we contextualise UK historic engagement on Defence with its European neighbours from the Treaty of Dunkirk onwards, showing the policy bipolarity between the sure anchor of NATO, and the flexing shift from multilateral intergovernmental arrangements between European states that the EU is now authorised to swallow up.

There are now four key threats from being too closely tied to EU Defence structures;

In the language of the Chequers Cabinet agreement and the White Paper that followed, the UK Government does talk in terms of the principality of NATO and of its separate status. But the pragmatic reality when speaking with diplomats is that European capitals are behind the scenes divided along very different fault lines. Different alliances flow over different aspects of future Defence integration, with some Governments prepared so sign off on certain arrangements while objecting to different proposals.

This fluidity creates a dangerous dynamic in Brussels negotiations, since it is the very prerequisite required for states to concede that ends up generating motion towards deeper Defence Union, and across a wider range of policy areas. As the process is slow, the evolution follows over time, but the nature of the EU treaties and the acquis communautaire means it never recedes and the direction is one way.

For this very reason, expressions inserted at the demand of certain EU states that EU Defence integration will not undermine NATO cannot be taken at face value. The aspiration is undermined by the practical effect over time of assigning strategic ambitions, creating big

budgets, identifying defence obligations, harmonising forces, creating common units, and creating a single Defence industry (with all the shutting down of peripheral factories that will follow). NATO is under real threat from this since the EU ambitions run on a steady long term trend.

The UK Government meanwhile is running a Brexit policy on defence that aspires to being institutionally close to the entities pursuing this process. It will therefore share the risks and damage when these policies develop. It will encourage elements of Whitehall to pursue even further the policy of the past twenty years, of pooling resources in order to cut UK costs, and with it independent capability. Too close an institutional affiliation meanwhile leads to too close a UK orbit, and no prospect of an easy escape vector when the ongoing process of EU integration bites into the bone.

Given proven trends, and demonstrable ambition, that time will come. The UK will then, by negligence, have contributed to a catastrophic Defence rift between the continents of Europe and North America. And of more direct and immediate concern, it will have triggered the breakdown the unique and irreplaceable Defence and Security relationship the UK has with the US.

NOTE: as the subject matter is acronym-heavy, a short glossary of some of the key phrases is provided in Annex C.