The Creeping Creation of The EU Military 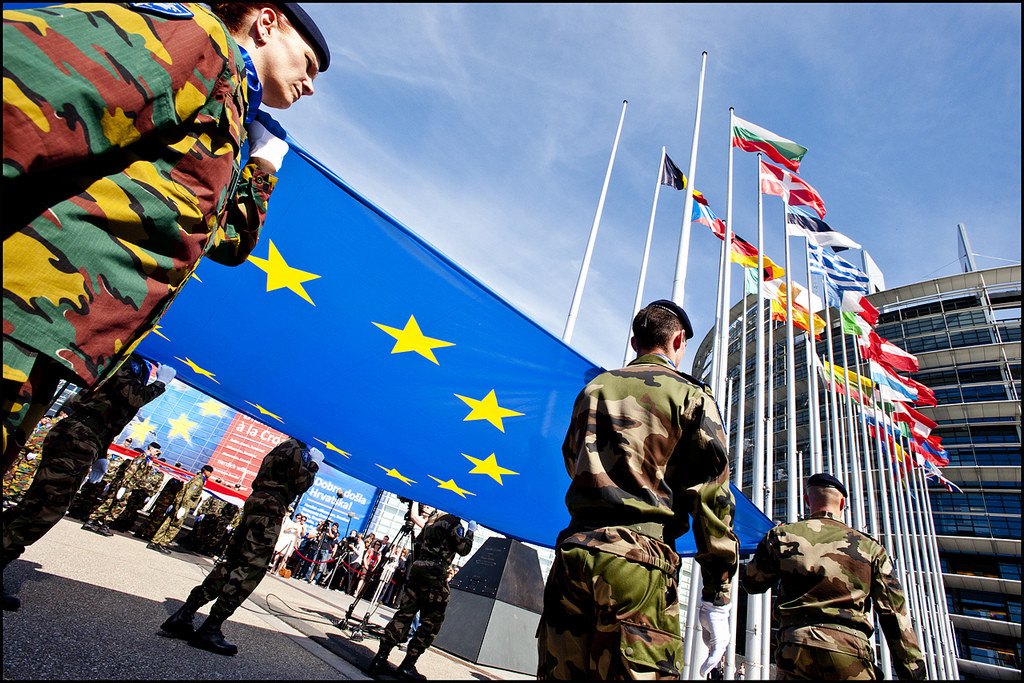 This piece informs many of the arguments likely to be made at the VfB event in Portsmouth today.

Common defence policy
The EU has already distorted and blurred lines in the UK defence context and the chain of command is in question.
The country’s democratic choices on when to deploy our forces, our choice of partnerships, our procurement and operational rules, they are now all under the purview of people in the EU Commission and EU Military Staff.
The UK’s operational choices in defence are so influenced that it distorts the actual chain of command. We simply can no longer say that the control of the UK armed forces is via the democratic will of the people. That has to change back to where it was 15 years ago.

Common defence
The concept of a unified EU army, navy and air force under one banner is only the end game and will not be finally announced until it’s too late for us to say no. Until then they will carry on doing what they are doing now, that is intensively intertwining our military with those of other EU states.
The end game of common defence is the only thing that can trigger a referendum under the European Union Act 2011, but the meaning of common defence is still to a degree unknown, it’s for them to define. They can take us down the road and up to the front door but all we can do is demand a referendum just before we’re pushed through the door. The EU federalist politicians in the EU and UK have complete liberty to take us 95% of the way towards common defence without asking us.

Cameron
Look at the current UK leadership. The country has inadvertently elected someone who believes in an integrated, federal EU albeit defined by other words, who wrongly believes the EU has kept peace rather than Nato, that war would break out between Nato members, who ignored the clamour from his own party and kept the UK locked in the European Defence Agency and signed Britain up to a defence integration project with France, CJEF, which ultimately falls under the authority of the EU. All of this was done with no mandate as these actions were not in his party manifesto ahead of his two general elections. For those reasons, we cannot trust Mr Cameron to block moves towards an EU Army.

EU military integration
It is being done completely in the open and doesn’t take a military strategist to observe that the conduct of the EU and federalist politicians such as Mr Cameron is towards gradual integration which we have seen at a staggering level since 1998.
The St Malo Declaration by PM Blair without a voter mandate, his subsequent surrender of the UK veto on common defence policy, joining EDA. That’s in less than 18 years.
Many of those changes took place to prepare for common defence policy in the Lisbon treaty which was only 7 years ago.
Much of the integration to which the UK has been subscribed by EU federalist leaders is yet to come.

Accretive tendency
There is an accretive tendency in EU policy making. 30 years ago, they said no loss of sovereignty. Look where we are today would parliament and courts overruled.
The method in use across economic and political structures is to initiate integration until structures are so conjoined that the political advocates are able to claim in a decade’s time that to extract the UK from such an entwined relationship would be impossible, dangerous, unthinkable. Then they would mobilise the taxpayer’s funds to mount a charm offensive to persuade everyone that it’s fine, harmless, a tiny change. Then it’s too late. They have the power to do all that now, to take us that far without a referendum. The aim is to make the UK Armed Forces, Her Majesty’s Armed Forces, so intertwined that they are rendered indistinct from other nations’ militaries despite technically having the same name.
The chain of command is shared with the EU already and is transitional – power is continuing to shift.

The usual method is to agree to a public vote over the end game only. The journey to the end game is entirely in their power so that eventually the final change is a simple switch and a virtual fait accompli. The eventual ‘choice’ people have would be couched in fear of dire consequences and accompanied by all the persuasion of a massive marketing campaign to persuade tax payers using their own tax money. In 10 years time they will have rushed through the same amount of integration that they’ve done in the last 10 years. It will make disentanglement of the UK Armed Forces very difficult.

The idea of UK armed forces being ultimately answerable to the monarch will be claimed as fact until long after it no longer applies when it will in truth be superseded by a chain of command that has grown to eclipse it – in the way that it took 29 years for the UK High Courts to fully understand in the 2001 Judge Morgan ruling that a 1973 European Communities act meant the UK was “living under a new legal order. Parliament surrendered its sovereignty in 1972. European laws have over-riding force with priority over our law.” The law comes in and it’s years down the line that the country realises there has been an incremental shift and the power was actually signed away long ago. The loss of power then is cloaked in a sense of resignation that it all happened so long ago with no complaint at the time. Of course there was no complaint at the time because the consequences were either misrepresented or not made clear through any kind of immediate change.

The BBC’s use of the term EU Navy when they would never say NATO Navy is an odd one. What is their motivation in the invention of such a bizarre phrase? Who’s asking them to use it? It’s certainly not the Royal Navy.